The National Institutes of Health (NIH) recently announced that it has accepted the Institute of Medicine’s recommendation of retiring over 300 of its chimpanzees. The US has been experimenting on chimpanzees for 90 years and is the last country in the industrialized world to do so. This news has been a long time coming. 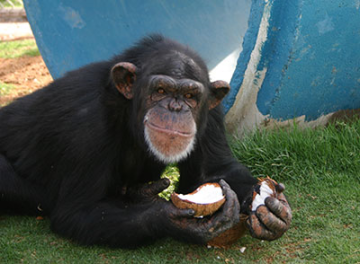 The chimps’ similarity to humans makes them coveted for research, but it’s this very similarity that poses an ethical dilemma. Besides, chimps are different to many ways. They have different immunities and reactions to diseases and drugs. For example, if chimps are purposefully infected with HIV, they rarely even show symptoms of AIDS. We can’t help humans by using animal testing models.

Regardless of similarities and differences, no animals should be used as research subjects, so it’s a great piece of news that most of the chimps will be retired.

The news is mixed though. Fifty chimps will remain with NIH. They won’t be bred, but that’s not enough. These intelligent, self-aware beings deserve to live out their lives at a sanctuary like Chimpanzee Sanctuary NW. Each one is an individual with unique traits and should be given the right to live free from harm and experimentation. It’s the least we can do, even though we owe them far more than that.

Chimpanzee Sanctuary NW has written about the NIH decision. I’ll be on the lookout for petitions to free the remaining 50 and I’ll post links to one as soon as I find it.

3 thoughts on “A win for chimps”