In less than two weeks, September 21st to be exact, the 2013 Walk for Farm Animals comes to Seattle. The event is organized by Farm Sanctuary, the largest farm animal shelter in North America. Farm sanctuary’s mission is to protect farm animals from cruelty, inspire change in the way society views and treats farm animals, and promote compassionate vegan living. 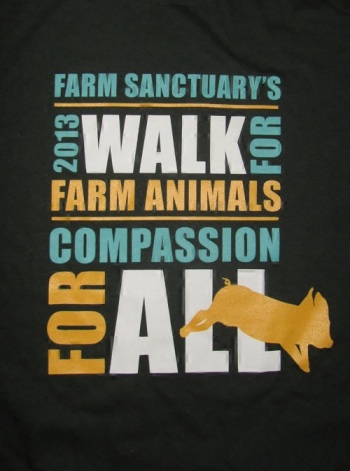 That’s why I’ve joined the event and have started raising funds for the cause. The purpose of my blog isn’t to solicit money, but if you’re interested in donating to a great cause, I’d love that! Of course if you’re in the area (or in a participating city), you’ll probably have fun joining the event and raising your own pledges.

I’m walking for Mesa, a friendly hen who escaped the brutal world of cock-fighting; for Winston, a scared piglet who escaped a live market in New York City; for Mark, a lamb who was sick and headed to slaughter; and for Michael, a dairy calf who was on his way to becoming veal.

There are many other stories like the ones above, and that’s why I support Farm Sanctuary  (I even have a Farm Sanctuary credit card, so a small portion of my purchases can help animals).

Won’t you walk with me?