Today is Japan Dolphin Day and more than 16,000 people are joining 117 events all over the world to raise awareness of the annual dolphin hunting season that started on September 1st in Taiji, Japan. 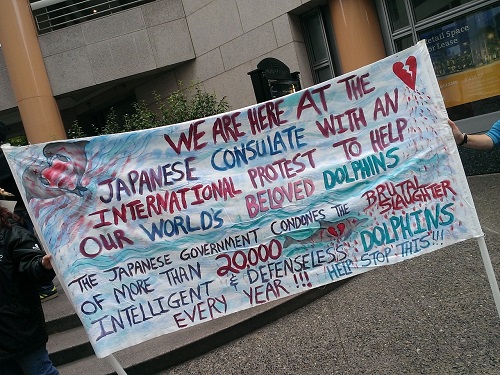 Every year, thousands of dolphins are captured and slaughtered in Taiji, by a small group of fishermen. For too long, this information was kept from the Japanese public and the rest of the world. The Oscar-winning documentary, The Cove, brought the horrors to light a few years ago.

We marched from Westlake Plaza, an outdoor square in downtown Seattle, to the Japanese Consulate a few blocks away. At the consulate, we held signs for passers-by and handed out literature to raise awareness of the issue. Some people knew, others were shocked by what they learned. 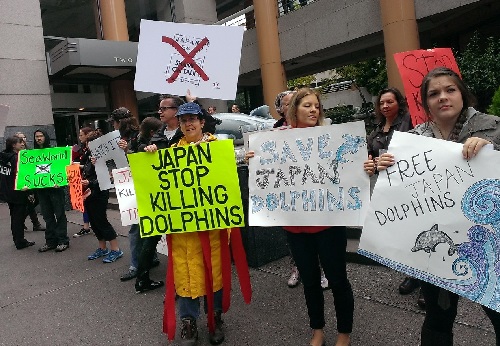 Dolphin meat isn’t a profitable venture, but the fishermen in Taiji can make a killing by selling live dolphins to marine parks around the world. For every performing dolphin, 17 of his friends and family are killed. Incredibly, dolphin trainers are in the boats with fishermen, picking the best candidates for marine parks. The rest are slaughtered.

Dolphin meat, isn’t healthy or safe (it’s loaded with mercury and PCBs) but it’s distributed to children in the school lunch program anyway.

The Japanese public hadn’t been aware of these atrocities until recently. Now that they know, they’re starting to do something. Brave activists from Japan and other countries are in Taiji now, protesting the slaughter. It’s especially significant that concerned Japanese are joining the efforts. Their culture doesn’t encourage speaking one’s mind, protesting in the streets, and questioning the government. But they are, and I applaud them.

Back in Seattle, far from Taiji, we showed our support for the activists in Japan and let the Japanese government know that we do not condone this abuse of our friends of the sea.

A couple of weeks ago, February 22nd to be precise, I took a long lunch break and drove to the Consulate of Japan in Seattle’s downtown core, and stood in the wind and rain with a sign and a stack of pamphlets.

Seems like an odd way to spend lunch, but I was there with a dedicated group of people to stand up to injustice. If you’ve seen the documentary The Cove, you know all about the dolphin slaughter in Taiji, Japan. If you haven’t seen the movie, I highly recommend it.

In Taiji, a village in Japan, a group of fishermen round up thousands of dolphins every year. Dolphin families are separated for the main goal of finding a few suitable candidates for marine parks. Selling a dolphin to a SeaWorld-type place is lucrative business. A life of slavery is no life at all. But the ones who don’t make the cut are slaughtered. The normally blue water turns red with the blood of dolphins as families of cetaceans watch each other die.

The rest of the animals are sold for meat (dolphin meat is intentionally mislabeled and sold in supermarkets) despite the high mercury content.

The Taiji Day of Action was a global event, and even though we were only a dozen strong, other groups all over the world were also protesting the slaughter of dolphins in Japan. We were targeting the Japanese Consulate and the International Olympic Committee (IOC) because the IOC is considering Tokyo as an Olympic host city in 2020. We say stop the slaughter or lose the bid!

No country is innocent. Canada slaughters seals, Spain conducts gruesome bullfights, animals are killed for food in every place on earth. But since the Olympics (and the money the games bring in) are part of the equation, there’s more leverage. It’s not an anti-Japanese cause. It’s a pro-animal one. In fact, Japan has a growing animal rights movement and I believe change will happen “from the inside.” Japanese people were once unaware of the slaughter, but now most disagree with it and some are even protesting it!

Want to help? Here’s a petition that you can sign.