What’s the problem with the elephant in the room?” asks veterinarian Mel Richardson rhetorically in the new HBO documentary An Apology to Elephants. He answers his own question: “the room.”

The problem of elephants in captivity is the heart of this film, narrated by Lily Tomlin. It guides viewers through our complicated relationships with elephants. It shows beautiful footage of wild herds and contrasts them with heartbreaking scenes from circuses and zoos.

The documentary interviews several elephant experts, including the late Pat Derby, co-founder of the Performing Animal Welfare Society (PAWS). Her sanctuary in California is a refuge for elephants.

The film is difficult to watch. Elephants in circuses and zoos are trained through forced submission and physical violence. The bull hook is an instrument of torture and the elephants learn to fear whoever bears one. But it’s important to know about the plight of captive elephants. How they’ve been ripped away from their families in Africa and Asia just to entertain us. 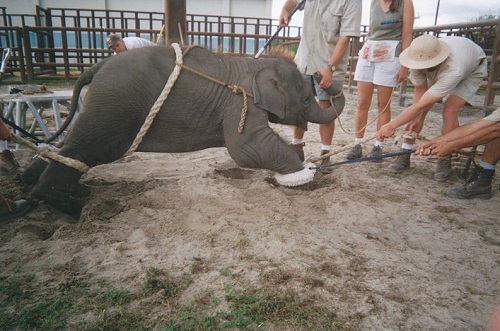 The performances that these majestic elephants are forced to participate in seems to mock their very elephant-ness. The ringleaders have stench of colonialism on them. Conquer, dominate, exploit, profit.

Elephants have been exploited for a long time. They’ve been used to perform hard labor, as instruments of war, as objects of entertainment, as transportation–not to mention being killed for their meat and ivory. Humans have been unkind to pachyderms and we owe them a better future.

Elephants in the wild form tight social bonds. Male babies stay with their mothers for up to 15 years. Females never leave the matriarchy.

The Oakland Zoo is featured prominently in the film as an example of a zoo that is changing. They’ve increased the enclosure (it’s still just 6 acres, but that’s six times bigger than Seattle’s paltry enclosure). Instead of direct contact (which involves bull hooks), they use indirect contact so trainers are never in the same area as the elephants. When they do interact with elephants, it’s through a fence and with positive reinforcement.

The trainers acquired the elephants through other, sub par zoos, and to my knowledge they aren’t breeding them. They acknowledged that the wild is the best place for elephants but since these ones can’t be released into the wild, improving their living conditions is the next best thing.

I don’t support zoos and I would like to see the Oakland Zoo elephants to go a sanctuary like PAWS too. Profiting from animals, whether in a zoo or circus, isn’t right. But on the spectrum of elephant treatment, Oakland is doing a whole lot more than most places.

After seeing this film, you can bet I’ll be at the circus the next time it comes to town–protesting it! In this area, Ringling has learned to stay out of Seattle, but they still come to Everett and Tacoma. I’ll be there, speaking up for the elephants who can’t. Elephants as old as I am who see nothing but the inside of trucks, the sharp end of a bull hook, and the jeering crowds in a circus tent.

I’ve written the Woodland Park Zoo in Seattle and asked that their elephants be released to a sanctuary. I encourage you to do the same. Write to the officials in Seattle or your local zoo.

Have you seen An Apology to Elephants? What did you think? Do you know of other captive elephants who have campaigns to help them?