I missed my vegan anniversary (veganniversary?). April marked 14 years that I’ve been vegan.

In my mind, that’s a good thing. Losing track means being vegan is no biggie; it’s a natural part of my life. I’m not trying hard to make it to the next milestone. It is part of who I am.

Of course it’s vegan! (I took this picture at Violet Sweet Shoppe–and then I added the 4)

I remember the date, only because April is the month I moved from Canada to the USA. I’d read John Robbins’ Diet for a New America in 1998 and immediately cut out milk. I stopped eating eggs (except the ones hidden in baked goods). Cheese was the one thing I hung onto.

But a big move, an empty fridge, new grocery stores, restaurants, friends, and habits. What a perfect time to draw a line in the sand, step over it, and go vegan.

I’ve never successfully reinvented myself (partly because I bring myself with me everywhere I move); however, I did use April 2000 as a time to reinvent my eating habits.

I was already a staunch animal advocate and long-time vegetarian. Moving and “starting over” was a great impetus for taking the big leap.

After I settled down in Seattle, I connected with the Northwest Animal Rights Network (NARN), met some terrific (smart, funny, passionate) animal rights people, and plugged into AR events around town.

That was it. It stuck. But it wasn’t a chore. It was–and is–an uplifting experience. Being vegan fills me with joy! I’m healthier for it, and I know I’m making a difference to animals who have no voice.

Sure, I’ve seen my share of unspeakable horrors in undercover videos and exposés. I’ve read about injustices and cruelty to animals that I never could have imagined in my worst nightmares. But I need to know the truth–and fight for those who can’t. Turning away doesn’t stop the cruelty.

I’ve also learned that it’s easy to burn out. So I make sure I lead a balanced life, complete with hobbies, interests, friends, and work. As important as it is to fight for animals, I know it’s also important to unwind, relax, recharge, and enjoy life.

I really believe we’re on the cusp of the next big social justice movement. I want to be on the right side of history. When generations from now, people ask why these evils happened, and who fought for the animals, I will know that I did. In some small way, I will have played a part in changing the world.

Grandiose? Perhaps. But hope and optimism fuel me. Well, that and delicious vegan food.

In Seattle, NARN organized a protest outside of the UW Primate Research Center at 3010 Western Ave. The infant primate research that goes on behind the walls of the grim facility haven’t produced cures for human diseases and further prove that animal testing is a bad idea.

At SeaTac Airport, The Bunny Alliance met to protest Delta Air Lines. Delta has a partnership with Air France, one of the few airlines that ship animals to labs. Many primates are imported from places like China and Vietnam. Without animals, labs wouldn’t have their research subjects and breeding farms wouldn’t make money by raising primates for labs.

What can I do?

There’s lot’s you can do! Putting pressure on businesses and government is essential. The EU recently banned the use of animals in cosmetic testing, as have Israel and India. Here are a few things you can do:

I’m so happy that there’s another animal fundraiser social event in my future. In October I wrote about a vegan wine and cheese tasting I went to. Sadly (or happily) the tickets sold out in less than two days so a lot of people I know couldn’t attend.

NARN is organizing another fundraiser–this one benefits Pigs Peace Sanctuary. And it’s in a bigger venue! That means that even though tickets are selling fast, there are still tickets available! I say get ’em while you can!

Pints for Pigs Peace is a pig-themed afternoon of fun at Central Cinema. There will be beer, movies, vegan food, brew-themed drawing prizes, and other treats. The cinema will be playing Babe, you know, the sweet, mid-90s movie about a little pig. And they’ll also show a heartwarming documentary about the important work at Pigs Peace Sanctuary.

This will be a fun event for beer lovers, wine lovers, and of course, animal lovers! Unlike the wine tasting, this event is all ages. You’ll be able to buy vegan food too, including Central Cinema’s vegan “pig in a blanket” and vegan pizza.

Check out Facebook to see the event info (but don’t forget your tickets).

Moo-ve over dairy, there’s a new kid in town.

Last night I had the most amazing time at a vegan wine and cheese party that NARN put on at Ltd Art Gallery in Seattle’s Capitol Hill neighborhood. The event was a fundraiser for Precious Life Animal Sanctuary in Sequim, WA. We were really lucky to have Ralph and Caryl Turner, the sanctuary founders, at the event.

We were treated to an array of non-dairy cheeses. I’m not talking about weak substitutes; I’m talking creamy, rich, tangy, flavorful spreads and slices that hold their own. I’ve already written about what’s wrong with dairy, so you know I was thrilled to taste cruelty-free cheeses. No cows harmed. For a lot of people, cheese is one of the hardest things to give up, and with options like these, you don’t have to.

So what’s vegan cheese made from? Lots of things. It was a diverse grouping of cheese with ingredients like cashews, nutritional yeast, tofu, garlic, herbs, oatmeal, sesame seeds and macadamia nuts.

As for wine, it’s a much subtler offender. All wine is technically vegan–it’s grapes! However, many wineries use animal products like egg albumen (from egg whites), gelatin (from boiling animal parts), and isinglass (from fish bladder membranes) in the refining process. But there are vegan alternatives. Until recently, I hadn’t paid much attention to whether or not wine was vegan, but I like to vote with my dollars and choose companies who are striving for a better world.

That’s why I was happy to taste the delicious selections from The Vegan Vine and Frey Wine. These two vegan wine companies generously donated wine to the event. They had a delicious selection–from sangiovese to chardonnay. Perhaps I woke up without a headache today because these companies are organic and don’t add sulfites to their products.

And of course (probably because the organizers knew I was coming), there were other vegan wines too. You can use Barnivore to find out which of your favorite wines (and beer and spirits) are vegan.

The best part of the evening was spending time with like-minded people and catching up with friends. We listened to swingin’ tunes by DJ Dubonnet and took in art by Siolo Thompson. The event was a hit–tickets went on sale in August and sold out in less than two days! I hope that means there will be more vegan wine and cheese events in my future. After all, the future is vegan! 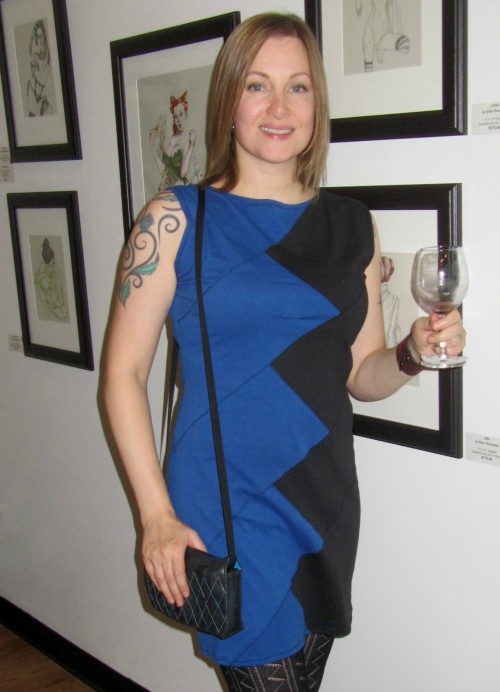 This past Saturday The Northwest Animal Rights Network (NARN) held a demo outside the University of Washington National Primate Research Center. We organized the event to coincide with World Week for Animals in Labs.

Hidden inside this dark, unmarked building, 700 primates live and die for research, subjected to painful surgeries and traumatic procedures until they aren’t useful anymore. The Blue Building at 3000 Western Avenue downtown Seattle is the main facility for the UW National Primate Research Center, the largest of eight across the country.

About a dozen of us spent a few hours with signs and fliers and shared info with passers-by. Many people were shocked to learn that wasteful and cruel experiments were happening in their neighborhood. The beautiful Seattle sculpture park is across the street, and no one suspects cruelty is around them.

The University of Washington spends millions of taxpayer dollars conducting needless tests that haven’t resulted in any contribution to humans or animals. Harvard recently decided to close its primate research center and it’s time for UW to do the same.

The UW has even been cited with safety and cruelty violations including performing unauthorized surgeries and letting a monkey starve to death. The university breeds monkeys too and removes babies from their mothers soon after they’re born.

We demo to let the public know about these atrocities but we also demo to let animal abusers know their deeds aren’t going unnoticed. As I’ve written about before, animal research isn’t good science.

What can you do?

Send a polite letter requesting the UW reevaluate its policies regarding animal experimentation and commit to long-term reduction of the use of any animals for science.

If you’re a UW grad, you can also contact the alumni association and tell them that you won’t join them (or that you’ll be cancelling your membership) unless the university agrees not to use live animals in their research.

This past weekend I participated in Vegfest, a healthy food festival in the Seattle Center. The annual event is put on by Vegetarians of Washington. Instead of just attending, I worked a shift at the NARN table. 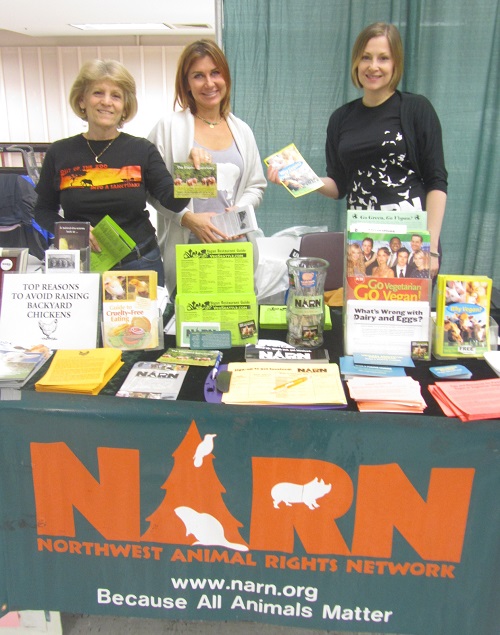 The NARN booth had a great selection of pamphlets and flyers about topics such as how dairy and eggs are cruel and unhealthy, that humane meat is a myth, and why fishing is unsustainable and causes a lot of suffering. We had information for parents who have vegan kids, and a restaurant guide for people looking for vegan places to eat.

A brand new tote was for sale too. They’re made from recycled bottles and have my new favorite slogan printed on them: The future is vegan. I’m not the only one who liked them. People snapped them up! For $20, you can too.

Attendance was great and we talked to a lot of supportive people. Some were vegan, some were toying with the idea, and some weren’t even vegetarian. But there was something for everyone. No matter where people were on their compassionate journeys, we talked to them and had good conversations.

I was surprised that three people came up to me over the course of my shift to tell me that since becoming vegan they’ve gone off their cholesterol medication. One man was vegan for only three weeks before his doctor retested his blood and told him he no longer needed statins. Amazing!

I became vegan for the animals so I sometimes forget I’ve made a really healthy choice too.

The festival had cooking demos, cookbooks for sale, and tons of free food samples. I was really impressed with Dave’s Killer Bread, Daiya vegan cheese, and juices from Blue Print Cleanse.

Have you been to Vegfest or a similar festival? I highly recommend it. It’s a lot of fun to be around like-minded people and have a wide variety of foods to try.