I love the vegan options in Seattle. In addition to tons of vegan restaurants, we’ve got a vegan grocery store, and a thriving group of activists.

Well, did you know that Field Roast is a Seattle company? It is, and I visited their new location in Seattle’s SODO neighborhood for an open house and BBQ. 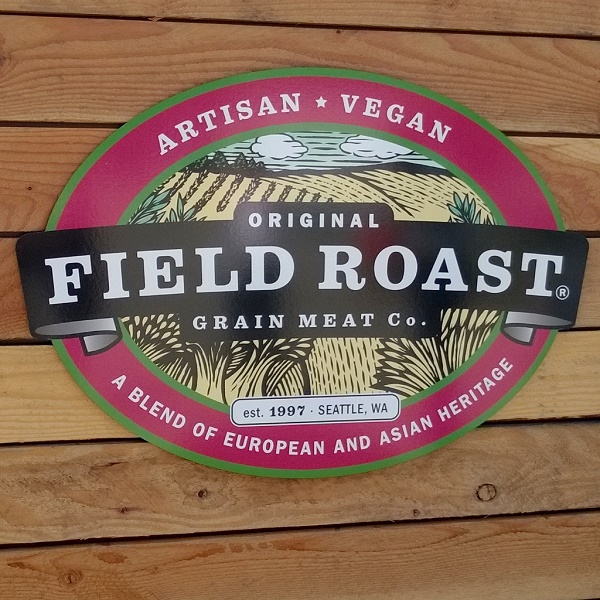 The tour was fantastic (no photos were allowed inside though). I arrived at the same time as a few other friends so we walked through the facilities together. I bet you wouldn’t enjoy seeing the inside of a typical sausage factory. But Field Roast is different; it was more like a bakery. We saw an immaculate series of rooms with industrial equipment like mixers and ovens. It smelled like all the wonderful spices in the Field Roast products.

We saw how the food is cooked, packaged and frozen for shipping. We toured the warehouse, test kitchen, and offices. I especially liked the sports wall–look at all the stadiums that carry Field Roast products!

Then, we were treated to an all-vegan BBQ!

I use Field Roast products a lot. I’ve blogged about how their sausages are great for making traditional recipes vegan. And their soft herbed cheese will win over omnivores every time. When I eat at Blue Star Café and the Georgetown Liquor Company, I order items made with Field Roast. Even the cafeteria at my work offers Field Roast!

After eating my delicious burger (like the one pictured above–that was one I had at Blue Star), the Seattle Cookie Counter arrived to give us dessert. Their a brand new vegan ice cream sandwich company that sells delectable treats out of a vintage VW bus!

I’m so grateful to have had a chance to see how Field Roast is made. I’m especially pleased to support a local, vegan company (they employ 65 people) that is ethical and progressive. Barbecuing might be an American pastime, but Field Roast will help make All-American Vegetarian the new way to think about BBQs.

Have you tried Field Roast products?