In the early 19th century in America, women couldn’t vote, slavery was legal, and blood-letting was a legitimate medical procedure. Around that time, scientists decided protein was the most important nutrient. We changed our thinking about the first three issues, but protein myths are still being perpetuated–and the meat, egg, and dairy industries want to keep the myths alive.

If you read nothing else:

Protein comes from a Greek term meaning of prime importance–talk about high regard! It was first described by Dutch scientist Gerardus Johannes Mulder in the early 19th century. His German contemporary, Justus von Liebig, called it “the stuff of life itself.”

Carl Voit, a 19th century German physicist, was enthusiastic about protein too. Even after discovering that 52g per day is all an adult man needs, he recommended 120g a day. Protein was regarded as the king of nutrients.

Not everyone was on board, though. in the early 20th century, Russell Henry Chittenden, an American biochemist and professor at Yale, disagreed with the idea that more was better. He tested his theory on himself by cutting his protein intake to 40g a day. He lost weight and felt better!

Chittenden then tested his ideas on his colleagues and school athletes and everyone in the study thrived. He upped the ante and gave ROTC recruits and world-class athletes low protein diets and tested their athletic performance. They all improved!

His colleagues chastised him in spite of his findings and the cult of protein continued.

Protein is a polypeptide (a long chain–or polymer–of about 15 to 20 amino acids). Of those amino acids, 8 or 9 are essential for consumption, meaning our bodies can’t make them. We have hundreds of thousands of different proteins in our bodies, many of which are enzymes. Proteins become enzymes (the catalyst for chemical reactions), hormones, and part of the structure of cells.

That makes protein an essential nutrient. We do need it. Our bodies constantly use new protein molecules, and get rid of old ones.

Want to be strong as an ox? Eat one! That was the thinking. And that’s why animal-sourced foods were (and still are) seen as higher-quality sources of protein.

Plant protein is referred to as “incomplete” because it doesn’t match our human amino acid profile. However, plant protein isn’t incomplete when it comes to fulfilling our dietary needs.

An early myth encouraged protein mixing. The thinking was that in order to compensate for an inadequate vegetarian diet, people needed to eat the proper combination of foods.

Frances Moore Lappé wrote about it in Diet for a Small Planet. However, she’s since changed her stance: “In 1971 I stressed protein complementarity because I assumed that the only way to get enough protein…was to create a protein as usable by the body as animal protein. In combating the myth that meat is the only way to get high-quality protein, I reinforced another myth. I gave the impression that in order to get enough protein without meat, considerable care was needed in choosing foods. Actually, it is much easier than I thought.”

The American Dietetic Association agrees: “Plant sources of protein alone can provide adequate amounts of the essential and nonessential amino acids. Conscious combining of these foods within a given meal…is unnecessary.”

Plants have protein too! Without protein, they wouldn’t grow. Protein from a whole food, plant-based diet is all we need, both in amount and kinds of nutrients. In fact, animal-based foods displaces complex carbs and antioxidants while adding unnecessary protein and fat of the wrong kind.

Yes, we need protein! And we should get protein from the places that big, strong, fast animals get them from: plants.

When protein has ratios of amino acids similar to ours, we synthesize it effectively. Animal protein is more likely to have these ratios  because we are similar to animals. While that might be efficient, it’s not necessarily ideal. Farmers want animals to grow big quickly so they can slaughter them sooner. But this fast rate of gain isn’t good for humans. We shouldn’t grow as fast as a farmed animal!

Animal protein creates an acidic environment in our blood (metabolic acidosis). Our bodies pull calcium from our bones to neutralize our blood, which can lead to osteoporosis. Then, excess protein is excreted in our waste, and that taxes the kidneys.

Plant protein has the opposite effect.

How much do I need?

A whole food, plant-based diet with variety will naturally contain enough protein. We don’t need to worry about not getting enough and we don’t need to be concerned just with protein; we need a balanced diet.

If you want numbers, no more that 8-10% of our calories need to be protein–even less as we age. The estimated average requirement (EAR) states that 0.5-0.6g of protein/kg of body weight is needed to replace what our bodies get rid of (4-5%). The recommended daily allowance (RDA) recommends 10% daily protein consumption, right in line with what a whole foods, plant-based diet provides! Broken down, that’s 0.8g/kg or about 48g/day for an average 60kg/132lb woman or 56g/day for an average 70kg/154lb man.

Now, if anyone asks you where you get your protein, you can confidently say, “from plants!” 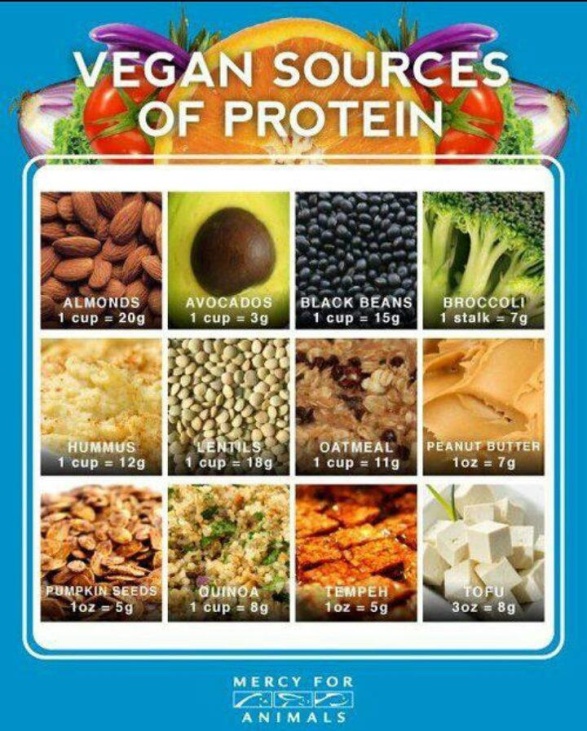 Much of this information comes from notes I took during the Plant-Based Nutrition program I completed this past summer. I have to thank Dr. T. Colin Campbell for his stellar lectures and Dr. John McDougall for his guest lecture. I am not a medical professional, but I care about my health and I take care to research carefully. I hope to spread the word and help people take control of their health. Where applicable, I’ve linked to sources.

8 thoughts on “The cult of protein”